Diary for the artists' project in Stoke-on-Trent. 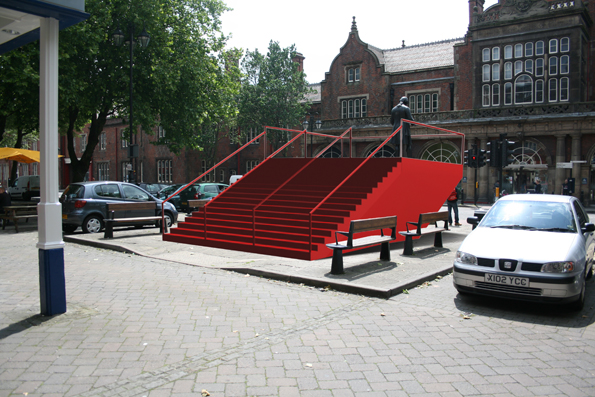 I suppose I should tell you a little about the work?
This has been inspired mainly by the reactions I’ve heard to the statue of Josiah Wedgwood. Some people feel that he is a great symbol of Stoke-on-Trent and its industrial heritage. Others are less glowing in their reports of his affect on the City - ‘he sold us out’ was one particularly strong response, referring to the collapse of the industry and closure of many potteries. Was Wedgwood himself to blame for this? It could be argued that the systems and business models he put in place paved the way for the ever-more cost-saving exercises utilised in the industry. Whether he foresaw this - and welcomed it - is another matter.
The platform gives people the opportunity to stand eye-to-eye with Wedgwood. If you like and/or revere him it will give you the chance to get closer to him. If you don’t like him it will place you both on the same level, as opposed to him being on a pedestal and you having to look up to him (and him looking down on you).
It is my intention that the deck behind the statue will be made into a pleasant place to sit - with seating and maybe some planting?

This website is maintained by Rich White. Texts are views of the respective authors © 2011